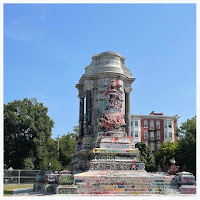 Item: Area Man Gets Sideswiped by Pedestal, Basically. The Statue of Limitations, long a towering feature at the epicenter of the roundabout in downtown Sue Falls Down And Cries Piteously, Manitoba, vanished sometime last night leaving only a faint rueful fart of an outline of legal poesy in the dry concrete pedestal and a trail of vague stinky innuendo spreading in all directions. There appear to be no witnesses to this enigmatic and mysterious act of public vandalism save for one Shane Link, local ribald raconteur, flaneur and self-described Totipotent Orgasmic Lifeforce, who said he was mindlessly minding his own bizwax at 3am having just described a quasi-semi-circular arc round and round and roundabout the Statue Of Limitations on his way easterly to his just desserts (lime cream pie at Beacon’s All Night Diner and Drinks On The Edge Of Town), behind the wheel of his snappy Chevron Algonquin electric diesel pontoon truck known as Al Paca when, in his words, “I was sideswiped! Preempted, sidetracked, and redirected violently, you might say and would say if you saw what I saw. And as I said, I looked around and there was nothing there! And I mean nada, zero, nix! And that includes the Statue of Limitations!”
Posted by Calvin at 8:59 PM No comments: